-8:45AM. Officer returned stolen property to a subject.

-9:06PM. Officer received a complaint from subject in regards to child custody issue.

-11:43AM. Officer called owner of property at 419 E Sycamore and left a message in regards to junk on property and tall weeds from last year.

-11:10AM. Officer spoke with out of state property owner in regards to junk and tall weeds on property here in town.

-4:11PM. Officer investigated a 2-vehicle accident. Vincent Paye, 48, of Dallas Center, driving 2016 Dodge Ram was stopped at stop sign at 220th Street off-ramp and H Avenue when he was struck from behind by a 2013 Ford driven by Nancy Jensen, 43, of Storm Lake. There was approximately $2,000.00 damage to the Jensen vehicle and $500.00 to the Payne vehicle. There were no charges filed.

-10:05AM. Officer assisted subject who had fallen and needed help getting to her feet.

-6:00PM. Officer arrested Kelly Boucher, 56, of Ogden for alleged operating while intoxicated in the 1200 block of H Avenue.

–9:35PM. Officer investigated a complaint of a possible intoxicated driver on hwy 169. Officer located the vehicle and the driver was fine.

-10:02PM. Officer arrested Douglas Haase, 63, of Ogden, in the 200 blk of South 1st for alleged operating while intoxicated and possession of a controlled substance.

-1:05PM. Denis Savits reported that someone had tried to pry open his front door.

-7:18PM. Officer stopped vehicle on westbound 220th off ramp into Ogden. The passenger in the vehicle was involved in a fight at the Wal Mart parking lot in Boone. A Boone County Deputy returned to Boone with the subject.

-8:28PM. Officer investigated a complaint of two vehicles driving careless around the city park. Officer was unable to locate any vehicles.

-10:18PM. Officer investigated a complaint of a vehicle going the wrong way on highway 30. Officer was unable to locate the vehicle.

-10:36AM. Officer arrested a juvenile for serious assault from an assault that occurred at Spinning Wheels skating rink on the 14th of April.

-10:36AM. Officer did a welfare check on an Ogden resident. The subject was fine.

-10:43AM. Officer handled a loose dog complaint at the Post Office.

-10:50AM. Officer assisted a subject with a building permit question.

-4:30PM. Officer investigated a complaint of harassment and bullying occurring at school.

-11:20PM. Officer assisted Boone County Deputies with a single vehicle accident in the 1100 block of 220th.

-11:13AM. Officer spoke with Ogden High School Principal in regards to bullying incident reported to Ogden Police on Thursday. The principal is aware and taking necessary steps at the school.

-1:40AM. Officer responded to a reported Burglary in Progress at 320 E Elm Street. Reporting party saw 2 male subjects climb thru window of house and then came out and ran down the alley and got in a white vehicle and left. The officer spoke with residents of house and they were fine and nothing was taken.

-7:57PM. Officer received a complaint of a possible drunk driver northbound on H Avenue from 270th. Officer stopped the vehicle in the 1200 block of H Avenue. The driver was not intoxicated. He was having trouble due to the trailer he was pulling.

-6:40PM. Officer received a complaint of suspicious activity in the 100 block of west Maple Street.

-8:18PM. Officer assisted Boone County Deputy and Ogden Fire with a fire at 602 I Avenue.

PSA-DUE TO RECENT VEHICLE BURGLARIES, OGDEN RESIDENTS ARE REMINDED TO LOCK THEIR VEHICLES.

The City of Ogden recognized Tom Kieffer on April 11, 2017 for 25 years of outstanding service to the community. Kieffer, who served as Building Inspector from 1992 to 2017, was presented a plaque during a recent City Council meeting. He is pictured with his son, Bob. 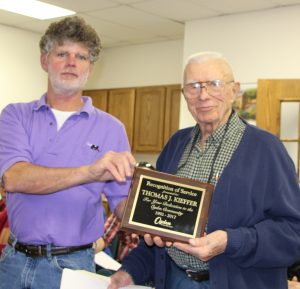 Our selection committee, made up of veterans, will select veterans for the flight with information contained in the Boone County Freedom Flight application form that each veteran is required to complete.

The Veteran’s Memorials in Washington D.C. were built to honor your service to our country; you deserve to visit them. For more information, visit http://www.boonecountyfreedomflight.us/aboutus/index.html

-10:45AM. An Ogden resident stopped by Ogden Police Department to inquire what could be done about a vehicle that has been left on his property by a family member.

-5:35PM. Officer was stopped by a citizen who had picked up a package that was left on the counter at Ogden Post Office. Officer delivered the package to the subject it was addressed to.

-8:52PM. Officer arrested Jamie Anderson, 35, of Glenwood Iowa for alleged operating a motor vehicle while intoxicated and driving while on the wrong side of a two lane highway in the 100 block of West Walnut St.

-8:00AM. A wallet was turned in at Ogden PD. The officer notified the owner that her wallet was found and could be retrieved at Ogden Police Department.

-8:20AM. John Millward reported that someone had entered 2 of his vehicles and took a set of keys from each vehicle.

-1:30PM. Officer responded to an incomplete 911 call from St John’s Catholic Church. This was a misdial by subject decorating the church.

-8:00PM. Officer was called to 425 N 1st Street in regards to a brown/white dog running loose. The officer was unable to catch the dog.

-9:38PM. Officer was called to the Spinning Wheels Skating Rink in regards to a fight between female juveniles. Charges are pending in this case.

-10:56AM. Officer spoke with Ogden resident in regards to junk around property.

-3:20PM. Officer was notified that one of the windows in shelter house at City Park was open. Officer closed the closed the window and secured several other windows.

PSA-DUE TO RECENT VEHICLE BURGLARIES, OGDEN RESIDENTS ARE REMINDED TO LOCK THEIR VEHICLES.

-9:52AM. Officer received a complaint of subject dumping his camping trailer holding tank into city sewer. The officer and Ogden Sewer Superintendent checked the area and could not find where anything had been dumped.

-12:03PM. Officer investigated a 2-vehicle accident involving minor injury at SW 5th and Mulberry. Makayla Carlson, 22, of Ogden was stopped at stop sign east bound on Mulberry Street when she pulled away in her 1999 Honda in front of a 2004 Chrysler that was northbound on SW 5th driven by Zachary McCloud, 18, of Ogden. There was approximately $2,500.00 damage done to the McCloud vehicle and $3,000.00 damage to the Carlson vehicle. Carlson was cited for Failure to Yield the Right of Way.

-9:15PM. Officer investigated a 2-vehicle accident in the Casey’s General Store parking lot. There was less than $1,500.00 damage, so no state report was filed.

-6:49AM. Curt Erickson, owner of south side Car Wash, reported that someone had hit both doors of his north bay after she had finished washing her car. There was approximately $1,500.00 damage.

-2:00PM. Officer spoke with resident about cleaning junk up from property.

-3:50PM. Officer advised street superintendent of a stop sign that was knocked down at SW 4th and Mulberry.

-9:37AM. Officer assisted subject locked out of vehicle.

-11:05AM. Officer assisted subject locked out of vehicle.

-5:19PM. An employee of Casey’s General Store reported a vehicle that had been parked in their parking lot for 3 hours. The officer was able to make contact with the owner of the vehicle and she moved the vehicle.

-7:35PM. Officer received a complaint of juveniles shooting a BB gun. The officer advised them to stop and not shoot in town in the future. 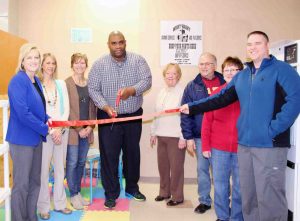 The Ambassadors also visited VisionBank in Ogden to express their appreciation. 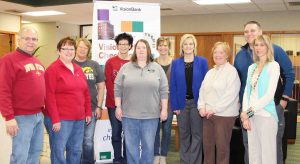 Ogden Legacy announces the continuation of a grant program to help homeowners fix-up their homes. Ogden Legacy has set aside $10,000 for the grant program with the City of Ogden providing up to an additional $20,000 for the program. The Fix-Up Grant is designed to increase property values and improve the general attractiveness of Ogden. Eligible projects include an improvement that improves the attractiveness of the exterior of a home and increases the value of an existing home within the City of Ogden. Special consideration will be given to applicants utilizing local suppliers and contractors for the improvement projects.

Grant funds will cover up to 50% of total project cost with a maximum grant of $1,500 per home. Applications must be submitted on or before April 1st, 2020. Projects must commence after April 1st, 2020 and must be completed by November 30, 2020. Request for payment must be submitted by December 18, 2020. Grants will be made if funds are available for the Program.

Persons interested in applying for the Fix-up Grant should complete an application detailing the project, cost and timeline and submit it by mail to Ogden Legacy before April 1st, 2020.  Grantees will be selected and notified by the end of April. Applications may be picked up at the Leonard Good Community Library, Ogden City Hall, The Ogden Reporter, Vision Bank, People’s Bank, RE/MAX Beacon Realty, Functional Chiropractic or Ogden Farm and Feed.

Awards will be made available after the expense has been incurred, receipts have been provided and the project has been completed as specified in the plans. Ogden Legacy Housing Committee reserves the right to determine eligibility, set the number of grants awarded, determine the amount of funds available and ensure program compliance.

-11:04PM. Officer investigated a possible motor vehicle theft at 507 E. Walnut St. The vehicle was located in Polk County and had been taken by a family member. The vehicle was returned and the complainant did not wish to file charges.

-9:05AM. Officer responded to 307 S 1st Street for an alarm that was going off. This turned out to be a faulty alarm.

-10:15AM. Ogden resident spoke with officer in regards to removing a vehicle from his property that belongs to a relative.

-10:40AM. Officer assisted subject locked out of vehicle.

-4:35PM. Officer received a report of a breaking and entering at an Ogden residence. There was nothing missing.

-8:05PM. Officer assisted Boone County Deputy with an accident in the 700 block of H Avenue.

-8:10AM. Paul Fangmann owner of Fang’s Auto, requested assistance with an abandoned vehicle on his property.

-10:45AM. Officer was dispatched to look for a Waste Management Truck that was westbound on 220th and leaking something out of the back. The officer was unable to locate the truck and assumed it went to the Boone County Landfill.

-3:29PM. Officer talked to Ogden resident and asked him to pick-up all the pop cans that were laying around his yard.

-7:48PM. Officer responded to the 400 block of 270th Street to back-up a Boone County Deputy with an alleged fight between a male and female. The female was still on scene but the male had left the area. The female denied any physical contact and would not say who was driving the car.

-11:29AM. Officer investigated a complaint of a reckless driver on highway 169. Officer located the vehicle and spoke to the driver.

-2:08AM.  Officer received a report of a 13-year-old male that had snuck out of grandma’s residence.  The officer was able to talk with the boy on his phone and advised him to go home, which he did.

-4:25PM.  Sara Norem reported that her mailbox was taken from outside of her residence.

-9:20AM.  Officer assisted Paul Fangmann, owner of Fang’s Automotive, with an abandoned vehicle.

-9:45AM.  Officer met with Insurance company representative to return items from a theft case years ago.

-1:36PM.  Officer responded to a reported domestic dispute at 822 N 1st Street.  This was a verbal argument only.  The male left the residence.

-7:37PM.  Officer arrested Daryl Johnson, 74, of Ogden for alleged OWI-1st Offense.  Johnson was also cited for having an open container.

-11:12AM. Officer assisted with a funeral escort.

-8:09PM. Officer assisted a Boone County Deputy on a traffic stop at Casey’s.

-4:18PM.  Officer was dispatched to look for a red Dodge Caravan reportedly driving carelessly westbound on 220th from Boone.  Officer stopped the vehicle in the 500 block of 220th Street.  Officer cited driver, Michael Prince, 52, of Churdan for alleged speed 75/55.

-11:03PM.  Officer received a complaint of juveniles knocking on door and window of residence at 501 W Division Street.  The officer caught 3 male juveniles and told them to go home.

-2:55PM.  Office assisted subject inquiring where he could park his motor home for the evening.